The Summer Henge, Twa Corbies, and a Chisel 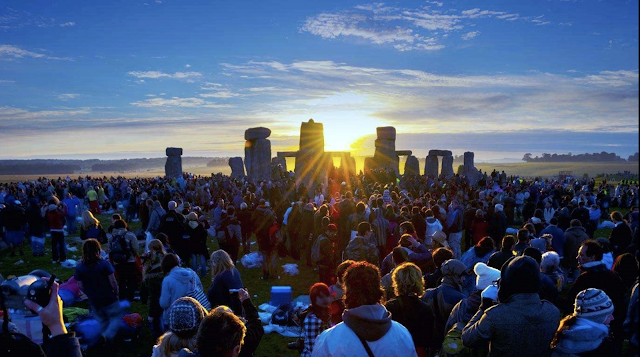 Is there a way to keep in check our own spiritual entitlement? Are we even aware of it? It is a natural outgrowth of prevailing paradigms of thought. Plant a flag. Colonize the world. Manifest destiny. How can we separate the task of spiritual custodianship from the ego-identification of being the custodian? How... can I. How do I. How do I not.
Mostly musings, but the timing of the Scarlets' post on 'Crow Work' at Boscawen-Un and being invited to watch the Soltice Sunrise in the same ten minutes – I thought how nice it must be also for Stonehenge to get a break. For all the stones to be able, as they no doubt did for many previous Summer Solstices, (mostly) alone, to bathe their naked bodies in the summer sun’s rays free of any interpretation we heap upon it. At least, as much of a break it can be with the camera of live feed. Stones gone wild.

I am torn between watching it (which also shows support for such a decision, ever mindful of optics as form of approval/support) or embracing some projected sympathy (or maybe an animistic understanding of its personhood) and wishing it privacy for once, letting its bones rest in peace. And also called to walk the land I’m on, to tend to the sacred wells and dolmens and ruins and rocks and monuments of my own foot-trod and make sure I look at what I’m doing, how I’m doing it, and just asking why. Less judgement and more honest observation to then, possibly, make a choice.
Either way, less disruption is good once in a while. The silence allows something often lost in the joys of celebration. Shut up, Jesse, walk, and tend.
Email Post
Labels: ego identification Scarlet Imprint spiritual custodianship spiritual entitlement Stonehenge western gaze