Suffering Through it, or, Breath is the Currency of the Living

Oba M'oro, a manifestation of Obatala, the Yoruba orisha (divinity) of creation and wisdom, is often paired and syncretized with Jesus carrying the Cross in the Cuban Diaspora. He is a manifestation of that loving force that shoulders our burdens, that rejects no one. He is often said to be a martyr, taking on the pains and sufferings of the world. He takes as his weapons the arma christi- the same weapons Jesus used to conquer death at the crucifixion- the crown of thorns, the ladder, the lance, the scourge, the nails, etc . He is, perhaps, one of the hardest caminos (literally “roads”, used for manifestation of each Orisha in the Cuban parlance) of Obatala to separate from his Christian masque. This being my road of Obatala, the Orisha I have crowned for a dozen years now, I’ve spent many a meditation on this pairing.

What is Oba M’oro, the King who Catches Ghosts, taking on by masking as Jesus on the Vía Dolorosa? Oba M’oro was a historical king of Oyo, who promised his dying father to move  the seat of power back to the ancient capital of Old Oyo. When he sent scouts to see what had become of the abandoned city, his officials had sent eni orisa- hunchbacks, dwarves, microcephalics, albinos and others who were outcasts- to roam the streets, making the city appear ‘haunted’. Oba Moro, whose earthly name was Abipa, was not deterred and he walked up to the ‘cursed’ ghosts, asking why they roamed the city. They revealed they had been hired by his own officials, who wished the capital to stay in the new location as their lands were more prosperous, even if the Kingdom as a whole suffered being separated from its ancient seat of power. Long story short, Oba M’oro ‘caught’ these ghosts and according to some stories, appointed them in place of his previous duplicitous advisors. The land is strengthened by all  voices participating, by the needs of the downtrodden and the outcast being met, not just those of the elite and the wealthy. This is the historical Oba M’oro, who masques as Jesus carrying the Cross, who himself surrounded himself with outcasts and the sinners of the world, who suffered that others may not be alone in their suffering.


Christian syncretism aside- what is there here in this pairing? What is this relationship with burden, with suffering? Suffering on behalf of the world, perhaps because the orisha of light, creativity, and dream can braid new realities from that suffering. So what is that suffering? What is our relationship to suffering, and what is our role in it?
We have a strange entanglement with 'suffering'. We avoid it. Criminalize it. Tell those that accept their suffering that they're weak. Not on their game spiritually. But that misses the point.

This is not to say that all who suffer *deserve* it. Far from it. What I want to consider is our internal relationship with suffering. Sometimes, no matter what we do, we must 'suffer through it.' It is part of our maturation as spiritual and emotional beings to understand this balance. What suffering is appropriate, what suffering is not.
Asking for forgiveness from someone? You only get to ask. They may not accept it. You get to suffer that. Even suffering through their indecision about it.
Someone asks for space and you want to keep talking to them? You get to suffer that. Honor their boundaries. To ignore them shows your lack of understanding of consent. So where is the balance? What is the imposition of your will as superior to theirs? When does your refusal to acknowledge someone’s boundaries become assault?
You make a choice that you regret? You get to suffer the pain of that decision. Right or wrong. It is what we sign on for in these bodies. It is beautiful and horrifying. It is life, this world of the marketplace!
Discomfort is a great teacher. Stop shunning it in favor of illusioned happiness and avoidant ignorance. Accept the reality and suffer it when necessary. And maybe, when it passes “over and through”, new things will come.
This is not to dive first into ‘mea culpa’ and glorifying suffering- for me it is a call to the opposite- to realize our part in our decisions. To understand that we don't get to control other people, only our reactions. And sometimes that's uncomfortable and painful.
But it is how we work in the world- our breath is an exchange with the world around us. A chance to co-create the world anew in the next breath. But we still much exchange, not just impose. Obatala breathes  emi, breath, into us, and we breath it out into the world. It is our currency with the world of the living.
The Lightness at the top if each breath, we are filled, and imagine new worlds- breathing out our suffering and giving it over to the white clad orisha of light and consciousness. That we may know when enough is enough, on both sides of our sufferings. 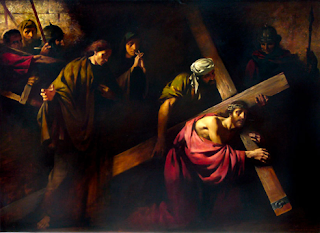 Someone is abusive to you? You do not have to suffer that. That is not divine suffering. Do not mistake pain with holiness.  The ability to discern what is necessary growth pang from unneeded abuse is sometimes quite difficult- and I wish each of you continued wisdom in that. I am still learning to know what is acceptable for me, and what is not. Healthy boundaries, even when filled with the orisha of forgiveness....
Maybe we must walk through our suffering to meet Forgiveness.
May we learn to suffer gracefully, and know the limits and necessities of suffering. May we know when enough is enough, and understand our role in all of it. May each breath be a chance to co-create the world with Obatala.

This great vastness that is Obatala- he/she just 'is'. And everything else is bright colored paint flinging through the air at what it is. It's their world and we're all living in it, looking for them to be a singular experience, not realizing we're breathing and walking through them. Can the creator be absent from creation? And what, as the created, is our role in this creation? What is the interaction of the creator with the creation they are also created by that creates the world again? Ah, breath, and light, there you are!
Much love. Endless praise to the King of the White Cloth, every day.
Email Post
Labels: Breath Ghost Catcher Jesus Oba M'oro Obatala Suffering Via Dolorosa
Location: The Bronx, NY, USA