The Suckling Tree /The Borders Crossed Us


There is a tree called Chichihuacuauhco. Some say it is a whole orchard. It is in the Land of Mists, in Tlalocan-Tamoanchan, the place where humanity was born in Mexica cosmology.

It is a place where children go when they die. The old stories speak of dead infants that had not tasted food yet being those who gathered under the Suckling Tree, the Wet Nurse Tree, the Succor of Innocence, which nourished them with milk that flowed from the many breasts which were its fruits. Having never taken life, they owed the gods nothing, and would be taken care of. They wait there, for the world to be destroyed and the next cycle of life to begin, when they will be given new bodies to inhabit.

For many, this clinging to innocence is a comfort. For others, it is the bare minimum those children who have been lost early demand.

The Queen of that Realm, of that Heaven, is a powerful star-demoness named Itzpapalotl, Obsidian Butterfly. She of the Claws on her Hands and Talons on her Feet, a fearsome Battle Queen. Some believe she avenges those whose innocence is stolen. She leads one fifth of the Divine Women, the Cihuateteo, those mothers who died in childbirth, who carry the Sun from noon to sunset, when they roam the crossroads looking for those who need some reminder of Divine Justice. Wrapped in her invisible cloak, or dressing like powerful women of the court, she moves among us, a force from the Outer World, whose agenda is not our own.

All these forces are in my mind with the reports of lost children. Who have been swept from their families for myriad of reasons and still crossed the border alone, by a system claiming no responsibility in a land whose borders have crossed peoples and civilizations without regards to anything other than profit and resource mongering. This is not new. This is not just under Trump. This is an OLD mismanagement stemming from a border that crossed a people arbitrarily then supported by complacence and convenience and bread and circus. 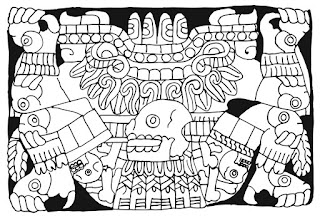 May the Land answer, may the Dead cause unrest. May we work to heal both.

Perhaps the Earth Monster should swallow us all and the Powers from the Outer Worlds can grind our bones and try again.

A prayer for the Lost, a call to action for the Rest. This is not new, and yes, we should be angry.

Addendum: Correcting information is so damn important, and I appreciate the twitter posts of Josie Duffy Rice who is seeking to correct information: 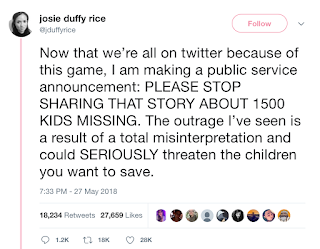 You can read the whole thread with some needed information here.

In a less poetic universe, where my flower song is still being stirred by early mo
rning coffee, this is a complex issue. A concern I have is that it took misinterpreting missing children (which anyone looking at facts can see that the children aren't missing, but outside the system, were not ripped from families, but crossed the border alone- one of the reasons I share the particular article I did in this blogpiece was for the factual information rather than sensationalized reaction) - the facts were always there to look at and the media and many friends quoted things that were not true because it finally fit their agenda to care. Issues of migration and the politics of la linea are so damn a part of a daily fabric for Mexicans and Mexican Americans. Hell, culturally we have whole saint cults that have developed because of it. Bias confirmation and 'now that I know of an issue' its hugely important side of modern social justice. Not condemning awareness, just the sudden caring as the next #thingtobeupsetabout. We should be upset. La Migra is upsetting in its tactics and existence. But it will soon most likely go back to the communities it affects directly, and yes, hampered by misinformation and spin by the media trying to take out Trump again, despite the policies coming from pre-Trump era. Not like Trump era policies make it *any* better.

It is a hopeful perspective and a needed correction of misinformation. Still grossly mismanaged and no accountability by a system even more discouraged by current political climate.

I'm probably cranky. Info is good. The circus is terrifying.

And still the always-awareness of the deity depicted in the image of the Suckling Tree above–Tezcatlipoca–the Smoking Mirror, creeps in between the cracks where he lives in constant observation, an entropy that keeps the Universe lubricated: he is the Enemy on Both Sides, after all. Trickster isn't on our side, and just like the Tzitzimime, his agenda is outside out own.

Still, I invoke the Suckling Tree, and hope that anyone 'lost', or outside the system, is getting what they need, and the Obsidian Butterfly still rules that Land where the Tree nurtures the Innocent. It is a call that we continue to not be complacent or turn our heads as the dust settles. Let the innocent be preserved, and may we fight for all. The pairing is even more intensely interesting in that juxtaposition. What is innocent is defended by claws and talons and wings made of blades.

A prayer for the Lost, a call to action for the Rest.
This is not new, and yes, we should be angry.

It is a Slippery Earth. Hang on tight. And fight.