The Days of the Cyprians, Second Offering

Continued from The Days of the Cyprians, First Offering 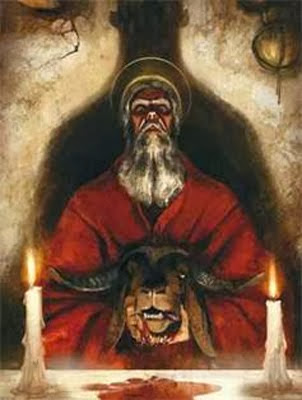 The Days of the Cyprians
Second Offering
(continued from First Offering)


Within the varied prayers ascribed to Saint Cyprian of Antioch in the various books attributed to him, one of the standout prayers from the Portuguese versions is the Cabra Preta- or Black Goat. It is a form of amarre- or love binding. It is found in the prayer books of many divergent Brazilian religious and spiritist denominations in similar form. Here is a particular favorite:

A translation courtesy of good friends Nicholaj and Katy:


There’s a black goat eating in the green field. I order to take from it milk and make three loaves. I send one to Satan, another to Caiaphas and the other for the Limping Dog, that is never far behind. If St. Justina would walk on the green field, and meet the Black Goat, she would, from the milk, make three loaves and send to Ferrabrás, Satan and the Limping Dog, that is never far behind. My St. Justina, powerful as you are, I want you to send me the Dog to talk with me, that he would give me (state your intent) and that he would not bring trouble to me, and if there must be three things, I want to hear the cock singing, the dog barking and the cat meowing at this moment. May the Seven Black Goats and the six thousands devils help me, May the Three Kings of the Orient help me, May the Three Souls help me, and also the Three Bells of Solomon, because I want the Limping Dog to speak with St. Justina, who will be commanded, now, now and now. Amen!


So identified with this prayer (and its variants) is Cyprian that sometimes he is called by the same name, as is the book itself. Alternatively he is Exu Gato Preto, Black Cat Exu, in a thinly veiled mask of the Saint within some houses of Quimbanda. This too has its origins in a working ascribed to the Ciprianillo:

The Work of the Black Cat Bone

This work must be done on the half moon or even better on the night of Holy Friday. Go to a river, making sure that you are alone, and fill an iron cauldron with water from the river. Make sure that the moon is reflected in the water, then add seeds and twigs of willow and lilies to the water and make a fire of willow and other lunar woods. When the water is boiling put the black cat into the water alive and boil it until the meat is loosened from its bones. Then take a linen cloth upon which the ponto of Exu Meia Noite has been drawn and strain the bones through it. You can now attain the bone of power or the bone of invisibility. The bone of invisibility is found by placing each bone in turn in your mouth as you look into a mirror; when your image fades or blurs the correct bone is in your mouth and will be taken for safekeeping and proper use. To gain the bone of power you need to throw all the bones into the water whilst singing the ponto of Exu Mea Noite having a black candle lit at your back and observe closely, as one bone will go against the current. Seize this bone and wrap it in the cloth and do not let it leave your sight for three days and nights, because in these days and nights Exu Meia Noite will come to try and take the bone away from you. Whatever you do, do not lose the bone, it must be kept as your sign of triumph. This being done, Exu Meia Noite will grant you the powers to direct his legions. (from Exu & the Quimbanda of Night and Fire, by Nicholaj de Mattos Frisvold, Scarlet Imprint, 2012; p. 219)

Quimbanda's Pomba Gira Maria Padilha herself is said to have learned her magic from a copy of the Ciprianillo given to her by the Witch of Evora, her mentor. Interesting too that Cyprian is considered a student of the great Exu Meia Noite, and the workings of the Ciprianillo are felt to echo the force and influence of this particular Exu. While the Black Cat Bone and the Prayer of the Black Goat are notorious stand outs, there are thousands of prayers and workings attributed to the Saint's Book. Another example Frisvold gives us reads:

Write on virgin paper in your own blood:  I, with the blood from my little finger, write this to Lucifer, so that he will do everything I want in life, and if this does not happen, I will no longer belong to him – then sign your name.

Write the same words on a black hen’s egg which has been fertilised by a black cock. Puncture a hole in the egg and let a drop of blood from the little finger of your right hand drop into it. Wrap the egg in cotton and black silk together with silver dust and place it under the black hen. From this egg will be born a little devil which should be kept inside a silver box with silver powder. Every Saturday feed the box blood from the little finger on your right hand so the little devil can drink the blood and grow strong. As the little devil grows in the blood bond with you, so will your magical abilities grow stronger and stronger. (ibid, p. 220)


What is certain is that Cyprian of Antioch exudes a particular mystique, an old world sorcerous practice given new life in the Americas. He is not a typical saint; he is truly a worker of both hands. In some areas, public devotion would carry with it a stigma of malefica and brujeria- which of course furthers his reputation, and increases divergent traditions of observation. As with the left-handed petitioning of any saint, what a saint protects the devout from is also what they can be used to attack and send. In this case, Saint Cyprian is as good at throwing curses as breaking them, healing as well as cursing, blessing as well as damning. In this way he is the model spirit ally and model sorcerer- for his devotees must make their own measure of morality and ethic.

Here too, I am reminded of the old fable of the man hiking through the woods who encounters a snake. The man recoils, but the snake calls out to him- pleads with him to carry him to the far end of the forest where the man is headed. The man is cautious and asks the snake to promise not to bite him. The snake concedes. After hours of walking and conversing, the man reaches the edge of the forest, puts the snake down carefully. Immediately the snake bites him, and as the poison takes the man's life he asks the snake why he did this when he promised not to do so- the snakes reply: "You knew what I was when you picked me up."

I am not interested in this as a simple beware the Saint, beware the occult, beware Magic interpretation. Rather- I am interested in the choice to engage the snake. The man could have said no. The man could have thrown the snake far away from him upon reaching the edge of the forest. Dropping our guard is not bravery. Vigilance is required in any sorcerous path. Any devotional path. We renew our commitments daily, hourly, with every breath. (Thus, a yearly a novena...)

Saint Cyprian makes the choice possible; the strength of each sorcerer, each bruja, each curandero, a product of their own merit alone.  There are no allegations scapegoated upon an outside figure. Here too is a hint of the Mexican tradition of the three skulls of Cyprian- or the asking of Cyprian to be one's patron in Quimbanda- we are the product of our own Work. We may be influenced by many angels and demons along the way, but it is our choice that reflexively blesses and curses.