The Feast of the Carthaginian has passed, and with it, the days of the Saints Cyprian begin. The period between September 16th, the Feast of Saint Cyprian of Carthage, and September 26th, the Feasts of the Saints Cyprian and Justina of Antioch- are referred to commonly as 'los dias de los Ciprianos'. As there are nine days between (the 17th through the 25th), it is traditional at this time for those who are devotees of Saint Cyprian of Antioch to offer a novena, a nine-day battery of prayer to their patron. While many conflate the two Cyprians (even Church historians), for the devoted the Carthaginian is merely a "marker" feast day - in Mexican streams, his day is important culturally as Independence Day- and esoterically as the start of the Cyprian festivities that culminate on the 26th.

The story of the Antioch Cyprian is related as early as the 4th century- that a pagan magician (Cyprian) sent demons after a Christian virgin (Justina) and after she was able to fend off the demons with the sign of the cross several times, Cyprian converts to Christianity. Rising in the ranks from deacon to priest to bishop, Cyprian is at once Christian cleric and knowledgeable sorcerer (for can we ever truly forget where we have been?)- and Justina in turn becomes head of a convent. Under Diocletian they were tortured, including being boiled in a cauldron- a common depiction of the two saints- and ultimately beheaded. The same fate befell Cyprian's chief student, named by some as Theoctistus, another bishop. Unburied for six days, the bodies were then taken by sailors to Rome, where they were interred first on the estate of the noblewoman Rufina, and later interred in the Basilica of Maxentius and Constantine, also in Rome.

As the unofficial patron saint of necromancers, sorcerers, witchcraft, and the occult, Saint Cyprian of Antioch receives much veneration in the New World, in large part due to the historical popularity of his cult -and the channeled Book(s) of Saint Cyprian- in the Iberian Peninsula, whose countries provided much of the colonizing force of the Americas. Many lineages of sorcery in Mexico trace their ancestry (whether in fact or symbolically) to 16 families that came in the early days of colonization. These were marrano families by tradition, and many retained practices from the Middle East while first guising as devout Jews, then by forced conversion to Catholicism, a multi-cultured melange of sorecerous tradition came to the New World.  It is said each of these families has a copy of the original Book of Cyprian, containing record of the Saint's magic and how to perform it. Fantastical as these stories are, there are similar versions of this told by divergent groups- often citing different families as having been in Mexico, Peru and Brazil. The 'fact' of these stories is less interesting to me than the perpetuation of them.

All over the Iberian colonies, different versions of this book- called the Ciprianillo, the Book of Saint Cyprian, the Treasure of Sorcerers- appear, and each claims similar mythic origin, usually at the hands of a devout religious clergyman who 'received' the book in a vision from the Antioch Cyprian himself, and less commonly, as the preservation of some of the pages of one of the original New World copies. There exist, for example, different color books - Green, Red, Black, Silver, Gold - offering different specialties of magic for the reader. The workings tend to be of an older flavor, and similar in character and utility as other popular Grimoires. It is still possible to find copies of other grimoires like the Keys of Solomon bound as the Ciprianillo.

The importance of the Saint in Mexican curanderismo and brujeria is well noted. He has a strong place in the Peruvian Shamanic Mesa tradition, and his cult is just as strong in Brazil where he shows up in full magical vigor in Quimbanda as well as Umbanda and its derivations. Folk Catholicism, while far from unified, appeals to him as San Deshacedor, the Great Saint Curse-Breaker, and the candles and prayers to Cyprian follow similar patterns of asking for the unbinding of all those afflicted by maledictions, sorcery and 'possessed of evil'. Popular tradition ascribes him the colors purple (the bishopric standard), red, and indigo; and the number 9 and less commonly 8 or 13.

In honor of these Days of the Cyprians, while I offer my personal novena to the great Saint, I will post a prayer or working each day for this Saint who is so important in so many of our lives. These are not meant to substitute for a novena proper, but I do hope they show the variety and richness of the traditions of the Antiochian Cyprian.


The Days of the Cyprians
First Offering


This prayer is commonly found as a general appeal for those afflicted by malefic magic, and for those tempted by the dark arts themselves.


Saint Cyprian of Antioch, I beseech you +
that those who are bound by maledictions, +
sorcery, +
and possessed of evil, +
that you unbind them, +
that you untie them, +
so that the rabid wolf not have dominion over them. +
Saint Cyprian, I pray preserve me from all evil intents, +
arts, + and deeds; + guard my vision and my thoughts; +
may they be full of confusion those who attempt against my life, +
may my enemies be confused and driven away, +
keep me triumphant over them eternally. +


I found the above prayer in several internet forums and blogs online, as well as on a candle in a botanica here in New York. The first is the commonly found prayer in Spanish/Castellano, the latter a common translation found on the internet. If anyone knows the original source, please let me know. Similar in vein is this prayer to Cyprian, translated from an Italian Spanish prayer card, and strikingly similar to many Spanish prayer cards.

Glorious Martyr,
Saint Cyprian of Antioch,
who by Divine Grace converted to the faith of our Lord Jesus Christ,
you who possessed the highest secrets of Magic,
build now a refuge for me against my enemies and their evil deeds.
For the merit that you obtained before God, Creator of heaven and earth,
cancel out all evil spirits, products of hate,
the spells that hardened hearts have cast or will come to cast
against my person and against my home.
With the permission of the All Powerful God,
answer my prayer and come to my assistance,
through the blood of our Lord Jesus Christ.
Amen.

In the days to come I will post more prayers and workings from different sources. May the good name of Saint Cyprian be spread, may his Grace keep the devout free from toil and strife, and through his intercession may we come to know our purpose and find the power to manifest it.

continued in The Days of the Cyprians, Second Offering 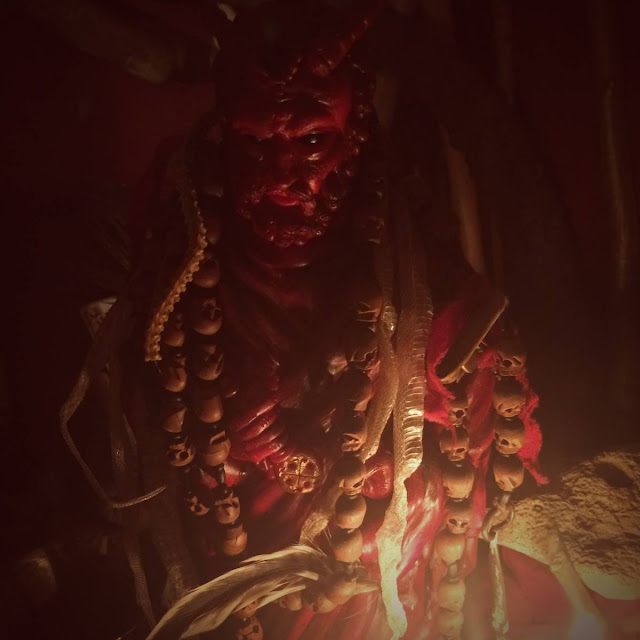