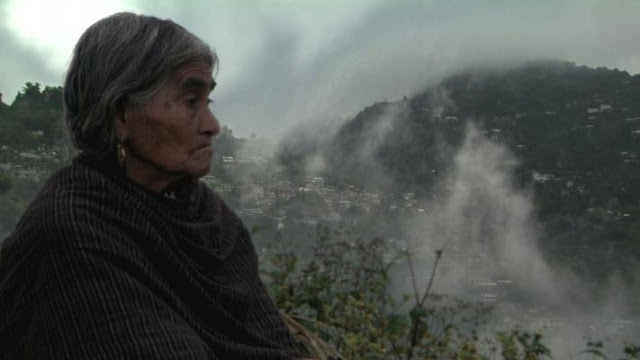 A formidable Mazatec healer and now folk-saint of Psilocibina, María Sabina is a complex figure. The deception of Wasson to gain access to the saint-children that would for him be an avenue to the Divine, was for her a corruption of their use as purgative medicine. Reading through her chants in Estrada's María Sabina: Her Life and Chants, I am amazed over and over again at the profound wisdom and soul-wrenching, resonating truth in her and her niece's words. In the session of July 1970 in the house Celerino Cerqueda, María Sabina and her niece, María Aurora, go back and forth, offering a flowing stream of prayer in Mazatec and pidgin Spanish, translated by Eloina Estrada de González and into English by Henry Munn. Consider this passage that occurs when María Aurora is aware if anyone is listening they may mistake what they are doing for witchcraft:

María Sabina
We're not trying to do harm to anybody

For María Sabina, "the path of the tracks of the hands, the paths of the tracks of the feet" is what one does, where one goes. Saint Peter and Saint Paul are strongly represented in the chants - Rothenberg informs they are tobacco, the patrons of medicine itself - and the prayers to them are quite beautiful later in the same session:

which clearly parallels the same structure. I find this mystery and foundation of Saint Peter and Saint Paul, the pair, as tobacco truly intriguing.

The sap and dew are referring to the saint-children, the flesh of God ("your communion wafer"), what we know as psilocibina. Commonly referred to by the nahuatl name, teonanacatl ("the flesh of the god[s]"), there is a commonly perceived connection between psilocybin and the Holy Sacrament among Mexican indigenous populations. It is a Mazatec belief that Christ, while carrying his cross, walked through the mountains. Where his blood fell, the saint-children arose; through the blood of Christ, we become the Saints, we become as gods. But in the worldview of María Sabina the saint-children were solely for the purpose of purgative healing.

"..from the moment the foreigners arrived to search for God, the saint children lost their purity. They lost their force; the foreigners spoiled them. From now on they won't be any good. There's no remedy for it." -María Sabina

Although Wasson was looking for a mystic experience that was counter to María Sabina's use of the saint-children, perhaps there was an illness after all. I bow to María Sabina, and I ponder: perhaps we are ill? Other indigenous beliefs speak of illness as deficit: if you are poor, you have an illness of poverty, for example. Is our disconnect from the Divine-as-immanent not symptomatic of illness? But perhaps it is the framing of the question - Wasson deceived by lying, expressing uncertainty about his son's whereabouts. This was enough for him to receive her help with the 'Little-One-Who-Springs-Forth', but a general search for God was not in Sabina's eyes. If he described his desire to find God not as curiosity but as concern that he felt disconnected, off-centre, and out of alignment with the world he lived in - is it recognition of our symptoms rather than idle-curiousity that changes the quest? Perhaps it is that when we have an illness, we seek to be well - whatever the cure is - and we don't go to the healer knowing what our cure is ahead of time. If knowledge of God is the remedy for your illness, this will come, but we must be open to the possibility that there are other things the mushrooms have to show us... Hmmm. It is said "They always give you what you need"....

If the saint-children are now spoiled, I can only imagine their potency under the care and administration of the curandero/as who dedicated their lives to working with them on behalf of healing their community.  Is grace diminished the more it is used? Is the don? Is magic? Is ashé? I know there is no (one) answer - I ask these questions for pondering myself and with others of like-ponderance...

Sabina was ultimately more than a healer, more than a spirit-worker. Rothenberg names three classes of magicians in Mazatec culture: Sorcerers, who by night are shape-shifters whose works are often malevolent (akin to nagualismo); Curers, who use massage, prepared herbal medicines and spirit invocation; and Wise Ones, who vow no evil and use no potions, but are workers of the saint-children, Psilocybe mexicana.

The assumption of saint, saintess, folk-saint and natural powers - this is the word as pure magic. Citing lineage, citing authority, conjuring your Power, I am simultaneously humbled and lifted-up by her chants. While the mushroom medicine was hers to hold and indeed her focus for these chants, for me, her words speak of an intense relationship with her God in intimate and immanent form; her words are inspiring beyond their original intention and meaning - and for this, I am thankful her words were recorded.