“...if you gaze into the abyss, the abyss gazes also into you” - Friedrich Nietzsche

Who is Saint Death? 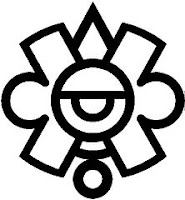 I spent my late teens and early twenties apprenticing several curanderas, three of whom had particular devotion to that quintessentially (in)famous folk-saint, La Santisima Muerte. All worked with Her differently, one from a strongly traditional Mexican Catholic vantage, one from a very danza-Azteca and ‘indio’ inspired vision, and the other from another view that incorporated many different traditions, including more folk-Catholicism of an indigenous nature and also including Afro-Cuban and Spiritist leanings. There were, however, common landmarks between all of them. All worked exclusively with the three "root" Muertes- white, red, and black. All considered her a universal presence of the Angel of Death, not specific to any one culture, even if their individual worship and workings were bound to specific languages, both spoken language and ritual language. All considered her the cuate of the Guadalupana, either in her Catholic guise as the Virgin Mary, or as the Mexica Tonantzin. The celebrations and ancestor reverence shown during los Dias de los Muertos  were extended to a year-round relationship with the Dead, heightened by their Saint Days, and anniversaries of the birth, marriage, and death; and the celebrations of the same los Dias de los Muertos were of paramount importance, where both la Virgen de Guadalupe and la Santa Muerte reigned, sisters reunited, allowing our Glorious Dead to come share the pleasures of life with us, safely, for a day or two or three, and vivify us in that way that only intimate work with the Dead and Death herself seem to do...

The past decade has seen a huge rise in La Flaca’s popularity, and this makes me so very happy. The role of the internet cannot be denied in this, and the dedicated efforts of those early webpages, like those of E. Bryant Holman, whom I was lucky enough to count as friend for many years before his untimely passing. Even more so, as the immigrant community increased in larger amounts in cities like Chicago and New York, testimony to Her Power has spread rapidly. She has left the shadows and sole-stigma of narco-traficantes and gang patronage- She is a saint of the home, of the family, and of marital bliss, of good works and good character. She is called upon to heal and to protect and enlighten, not just to seduce or seek revenge. She protects all who come to her, for she will accept all, no questions asked.   Her popularity has led to many adaptations of her worship and workings, and her appropriation into many groups outside of those she first originated in. Unfortunately She has also met the blasphemous Our Lady of Consumption, that horrible mother of consumerism, where products are made solely for the benefit of the botanica owners and street vendors who peddle her wares, carrying little fuerza or virtue.

I sincerely doubt anyone can say with certainty the cult’s origins- as it incorporates so many influences- indeed it is a Mexican understanding of death that precipitates her being. And Mexico is herself the child of many fathers. 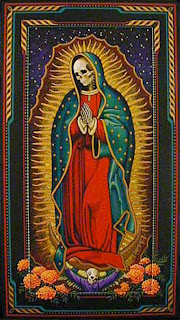 Is this the ancient belief of the indios in the rulers of Xibalba and Mictlan, those skeletal lord and lady of death who after four years accept the wandering dead person into their court and smash their bones to dust? Or is it the Spanish Church’s preference on the angel of death as a principal force in la Regla Catolica, perhaps even influenced by the Iberian Islamic ideals of the same? Is it a corruption of St. Bernard of Clairveaux as many have purported, where the practice of depicting a ‘momento mori’ saint as a skeletal figure was misinterpreted? Or is She a modern apparition of the Virgin Mary as others believe, uniquely suiting the needs of her people, asking the famous question- Cuix amo nican nicà nimoNantzin? am I not here, who am your Mother? Why can’t she be all?

Innovation rooted in tradition isn’t a bad thing. 'Good' Innovation, is the hallmark of a successful relationship with Spirit, especially when the impulse comes from somewhere else besides the intellect. However, passing off innovation as tradition to people untrained enough to see the difference borders on shady at best. And selling people on a miracle cure from a purple statue made of plastic is a unique offense I sincerely hope has an equally singular punishment in the Nine Underworlds.   The primary three Huesas are the colors they are because these are the colors they always have been, expressed across many cultures- most notably, from my experience, in the Ajé of Yoruba cosmology, and also expressions of certain cults like Quimbanda of Brazil, amongst others. There are specifics in these color resonances, and the Ladies Three seem to reflect the processes of death these respective colors hint at. This is not to say that other manifestations cannot exist- but I place a lot of weight on these three manifestations given what they represent. The answers are there, exposed in the various stages of decay, fluids and remains.

The key thing, in working with La Santisima, is that, while one is calling the Angel of Death or perhaps the Goddess of the Underworld, it is She-who-takes-the-life-of-all who answers- and more specifically, and importantly- it is your Death, your Reaper. It is a personal relationship with that-which-will-kill-you. She is not a representation of Death in the abstract sense, She changes, for each person, to be the Death-that-they-will-meet. Not your friend’s Death- your Death. Working one color over the other will also influence  the Death that comes for you. This is Imminent Death- this is Personal Death. She is at the start, an apotropaic force, and in time, the wisest of counselors, a Death of one's own design.

It is the choices we make in working with Her, that, pardon the pun, colors our death. I close with Nicholaj de Mattos Frisvold’s description of the third Fate, Atropos/ Decima, most apropos in this effort:

“ She is the crossroad of chance and is our constant companion in life. In the end we meet Atropos, the inevitable, Saint Death herself. Your allotted share always gives chance, and death can be black, red or white.”  ( p.54, Nicholaj de Mattos Frisvold, Pomba Gira and the Quimbanda of Mbùmba Nzila, Scarlet Imprint, Bibliothèque Rouge edition, 2011.)


We are always given a choice. The manner in which we choose says as much as the choice itself, be it white, red, or black.